Art took the center stage as the main actor at the gala in an event that had seen colleges, secondary and primary schools submit over 350 films for screening

The best film and performances in various categories were awarded, with the top top-rated actors getting an opportunity for training in professional acting and film during the school holidays

It was a day of glitz and glamour as students, teachers, actors and film enthusiasts gathered at the Kenya Film Festival 2022 gala event.

The Saturday July 2 gala was a culmination of a one-week residential film screening event that no doubt lived to its billing – especially coming after a long break owing to the vagaries of Covid-19 pandemic.

This years’ event took place at the footsteps of the Aberdare Ranges – at the Tafaria Castle & Center for the Arts. 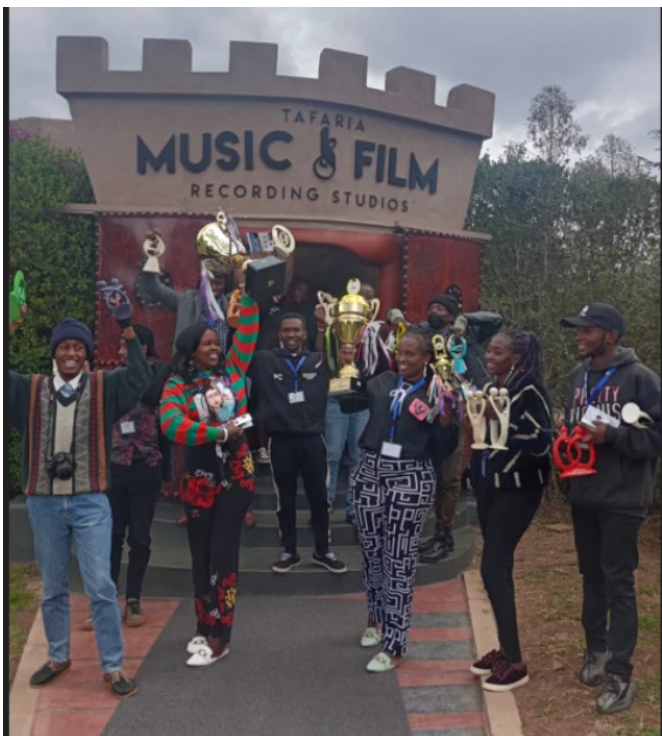 Indeed, art took the center stage as the main actor at the gala in an event that had seen colleges, secondary and primary schools submit over 350 films for screening.

A warm, beautiful rendition of the Kenya National anthem – and the East African anthem – played by Ghetto Classics announced the start of the gala event.

According to Tafaria Castle & Center for the Arts founder Mr. George Waititu and his wife Eunice – the facility has in the past hosted many people, but has never experienced the level of interrogation as they did during the film festival – which is beautiful.

“The Center for Arts was established to transform this place where I grew up as a child, to transform the minds, and the only way to do that was through the arts,” Mr. Waititu told a packed auditorium in his welcoming speech.

Adding: “This is a once upon a time dream. Any dream can be realized.”

That dream was shared right on the stage as students from St. Mary’s Aberdares secondary school –under the tutelage of Fashion Agenda Africa – took fashion to the stage.

The theme was ‘conscious consumerism – which according to Fashion Agenda Africa Founder Akinyi Odongo – is focused on changing perception with regards to fashion waste, and encouraging people to be conscious of what they wear.

The clothes were made from pieces of clothes picked from the neighbourhood – but which the students turned into beautiful pieces. The local boys and girls did not disappoint on the runway – a beautiful proof that a beautiful gala has to be ‘consciously clothed’. More clothes please.

Then there was this beautiful screen dance by the State House Girls – dubbed Moral Right – that lit up the amphitheater – opening the doors for speeches.

“Our schools have lost a lot during the pandemic, but schools’ programs are resuming and we want to keep our students busy with co-curricular activities by giving them a full calendar. I am happy, that this event has been successful despite the pandemic,” said Director Duale.

Speaking on behalf of the Chief Guest, Dr Njegere said: “This event signifies the return of the activities we love. You may have noticed the return of inter schools’ athletics at the regional level heralding the return of national school events.”

“The government of Kenya through the Ministry of Education is committed to ensuring quality education to all citizens. The government realizes that the focus of education should be the individual learner, recognizing that individuals have God given competencies is our duty,” said Dr. Njegere.

The event saw students receive trophies and scholarships on arts and film – from sponsors and partners of Kenya Schools & Colleges Film Festival 2022.

On its part, Canon East Africa through Business Development Manager Mr. John Wambugu offered training opportunities, cameras and other accessories to some of the winners.

The Film Council of Kenya also handed cameras and tripods which were given to best public schools in their categories.

Tafaria Castle and Center for the Arts, this years’ host, crowned it all with a Sh500,000 sponsorship deal to the best school that is so deserving – as decided by the judges.

All they need to do is come, and we will support them to produce the best film, measured against good standards,” Mr Waititu said.

The best film and performances in various categories were awarded, with the top top-rated actors getting an opportunity for training in professional acting and film during the school holidays.

Some of the winners in this year’s festival included:

KUCCPS opens portal for 2022 KCSE candidates; Check Out The Minimum Requirements And…

Both Raila & Ruto Benefited From Chebukati’s Erroneous Tallies In These…