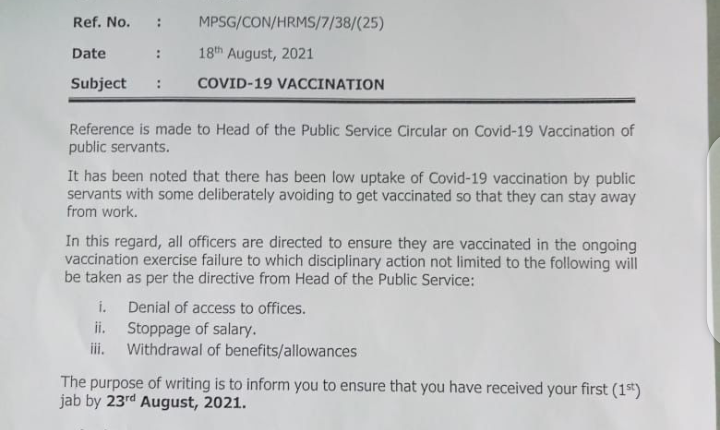 “As on that, I would say it is a choice one has to make..” Answered president Uhuru Kenyatta.
The above response was in line with an interview question shot at the president during his interview with senior reporters and editors at the state house, Nairobi on Tuesday this week.

The question came at a point in time just when public service head had issued an order nearly a week ago to have all the public servants in the essential services sectors such as health workers, teachers amongst others, seek vaccination services, with a deadline imposed at 23rd August,2021, two days ago
The order was to be succeeded with radical disciplinary measures such as being barred from accessing offices, withdrawal of benefits and allowances, stoppage of monthly pay, an order that the Ministry of public service had place before all servants, supported by the Teacher Service Commission in a secular to teachers.

HE. Uhuru Kenyatta’s interview which was aired live at Citizen Tv yesterday, 24th August,2021 came as a big relief to a number of Kenyans in both the civil and public sectors but had felt violated to take a forced vaccination even though they didn’t believe in it for personal reasons including but not limited to religious beliefs.

However, the Teachers Service Commission, an employer to all the teachers in the country on behalf of the government has not communicated contrary to its initial stern order, thus leaving the teaching fraternity in a state of confusion.

While speaking to the media, the president seemed to downplay any move by the government to forcefully push its employees into covid-19 vaccination. The president however, strongly appealed to the in the vulnerable category to consider vaccination option as this will be helpful to themselves and to their families.

“And you must remember that we are doing this for ourselves, our families and our people. So, a better thing to do, as for me, is to get vaccinated..” The president added

Rumors On Better Performance In English & Kiswahili Surfaces Ahead Of KCPE…

Police Boss Shot Dead By His Junior For Reprimanding Him Over Lateness To Work.

Legislatures set to restore sanity in TSC by cutting on its powers.