“A church paid me for each successful murder.” Serial Killers admits to authorities.

This week news headlines has had it all, murder! Reports of killings arbitrary killings have hit the headlines with not one but two self-confessed serial killers whose main targets have been children and women. 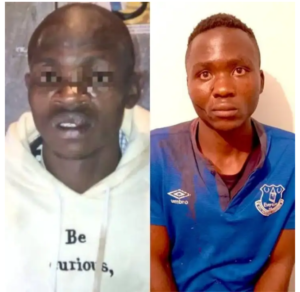 Paul Maraga Moraa, a 29-year-old man has confessed to the security officers that he has been attacking women, defiling them before taking their lives.

His admitting the crime has left the residents of Kiambu and Kenyans at large shocked for words. Magara confesses to have been brutally killing for money.

In a bold move, Maraga unmasked how he was bankrolled by a church suspected to be practising occult. He says that the church has been paying him Sh30,000 for each case of murder.

According to Magara, he was introduced to the church by his unnamed friend sometimes last year. He was told that each time he kills, he would be paid Sh30,000. Magara says that he was told to be killing women since they are easiest compared to men.

Each time he killed, Magara was supposed to carry the victim’s under clothes soaked with blood and would later go home with his payment of Sh30,000.

The serial killer has disclosed how he executed his first mission at Kihunguro along Ruiru bypass. He says that he tricked a young lady and then booked a room. Magara says that he killed her and chopped off her body parts. He says that after killing the first person, he felt the urge to kill more.

The police officers have said that they have kept secret the identity of the said church so that they don’t jeopardise the ongoing investigations.

Mt. Kenya University Offers Milly Nafula, The Girl Who Scored an ‘A’ 14…

What You Need To Know About The 11 Different Types Of Number Plates In Kenya.