Book Review: The Merchant Of Venice By William Shakespeare

Shakespeare’s play begins with a character, Antonio who is a rich merchant from Venice, so deeply melancholic over his wealth (ship) that’s on the sea. His friend Bassanio is desperately in need of money to help him win the heart of a beautiful lady called Portia. Portia is a wealthy heiress residing in a city known as Belmont. Because of their treasured friendship, Bassanio seeks Antonio’s financial assistance.

Antonio has to help Bassanio secure some money to get to Belmont since, at the moment he is financially incapacitated and may not even accompany him to Belmont. All his money is held up on his investments, that is the trade ships on transit at sea. As a great friend, Antonio advises Bassanio they secure some loan from
a Jewish money lender in the city named Shylock on the security of Antonio’s expected shipments and have Antonio as his loan’s guarantor.

Portia is beautiful, rich and very ripe for marriage, however, her late father placed tough terms on his will for any man that must win her hands in marriage. To marry her, you must correctly choose one of three caskets made of gold, silver, and lead that bears the correct message. So far, none of Portia’s many suitors has impressed them both her and Nerissa, her maiden.

Back at Venice, Antonio and Bassanio successfully secure a loan from Shylock. Shylock, a Jew has always harboured some long standing grudge with Antonio, a christian who had a habit of berating Shylock amongst other Jews usurers for their business of money lending at exorbitant rates of interest. Initially, Antonio and other Christians would lend out money for free thus messing up the money-lending business. Shylock lends Bassanio three thousand ducats at no interest. However, Shylock makes them agree that to it that he will claim a pound of Antonio’s own flesh should Bassanio fail to pay back the money. Antonio blindly agrees to the term of contract even though Bassanio appears uncomfortable.

Shylock’s servants, Launcelot, plans to go work for Bassanio. Shylock’s daughter, Jessica, also plans to elope with Lorenzo who is Antonio’s friend and a Christian but she madly desire to marry him. Before leaving, Launcelot serves Shylock with a letter containing Lorenzo and Jessica’s plan to elope. In the process, Jessica elopes, taking gold and other jewels with her. That night is painted with celebration out at the streets. Immediately after daybreak, Bassanio and his friend Gratiano leave for Belmont to woo Portia as Shylock bitterly laments over the departure of his daughter and more, of the treasures she stole with her.

In Belmont, Prince of Morocco tries his luck at the casket to win the fair Portia’s hand in marriage. He chooses the golden casket and losses. Follows another, the Prince of Aragon, he looks so arrogant, he picks on silver casket and equally losses. Both, chose wrong caskets. Bassanio entrance is announced as prince of Aragon leaves. Portia feels differently in her body, elated. She goes to greet and grandly receive Bassanio. Immediately, Bassanio makes his choice of the casket, he chooses the dull looking lead casket and wins the marriage test. Portia marvels greatly and Gratiano admits having a soft spot for Nerissa and instantly, double wedding occurs followed by a thick celebration. However, the celebration is cut short by the news of Antonio’s ship wreckage. Back in Venice, Shylock is dying with fury over his daughter’s elopement. Only one thing turns to makes him happy, Antonio’s predicament. News of his wrecked ships hit the air waves. Shylock will soon claim his debt, a “pound of flesh!”

With panic at heart, Bassanio and Gratiano instantly depart to Venice in an attempt to save Antonio’s life. Portia and Nerissa follow the two gentlemen slightly later, to Venice. The two ladies disguise themselves as men.

Shylock insists on cutting off a pound of flesh from Antonio’s body despite the numerous pleas for mercy. A legal trial is staged. The duke of Venice presiding over the trial declares seeking assistance from a legal expert called “Balthazar,”. The legal expert turns who turns out to be Portia very much disguised as a young gentleman of law.

Shylock is persuaded further to show mercy by the legal expert (Belthazar) but to no avail. He insists only on the pound of flesh. Desperately, Bassanio offers Shylock twice the ducats he loaned, but Shylock persistently insists on the bond as it was on the agreement. This prompts Belthazar to relook into the agreement upon which, she declares that Shylock is right in his quest for the pound of the merchant’s flesh.

The delighted Shylock gets more eager to harvest his due when sharply Belthazar reminds him he must cause Antonio no bleeding as the agreement does not permit him to any blood spillage. Again, the flesh cut must weigh exactly a pound, no more, no less. Lastly, he mustn’t kill Antonio in the process of extracting his pound of flesh. Shylock feel trapped and changes his mind to pick Bassanio’s money instead, but Portia can’t allow it. She insists only on the bond as is written or nothing at all.

The court (Portia) finds Shylock guilty of wanting to kill a Venetian citizen, penalty being, he must surrender half of his property to Venice state, half to Antonio. Shylock’s life is spared by the Duke, who takes a fine instead of Shylock’s property. On two conditions, Antonio spares half of Shylock’s wealth.
i. Wealth goes to Lorenzo and Jessica.
ii. Shylock converts into Christianity
The court session ends with a defeated Shylock submitting. ‘Portia and Nerissa’ still disguised, are appreciated but they ask Bassanio and Graziano ( who do not know) for the rings. They refuse but Antonio intervenes and they give out.
The two ‘disguised’ ladies quickly leave back from Belmont. When their husbands later join, they rebuke them for giving out their marital rings before they finally reveal their identities as the judges who helped with the trial. News of Antonio’s ships safe arrival hits him. Celebration ensues. 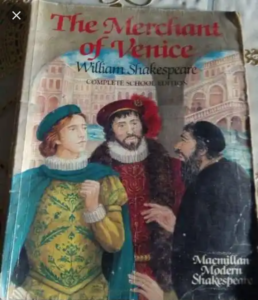 Ksh. 3M Worth Of School Gate With A Detention Cell Launched At Bungoma High School.

Phones That Will Not Support WhatsApp Usage As From November

KMTC: How To Apply For KMTC Courses Online

March 2022 Intake: KMTC Will Not Receive Applications For The Following Courses

Meet A Secondary School Where 136 Students Have Run Away From The Principal.

Simple Steps On How To Withdraw From Teachers Unions, KUPPET & KNUT.