Cracks On Ruto’s UDA Camp As Governor From Central Threatens To Walk Away.. 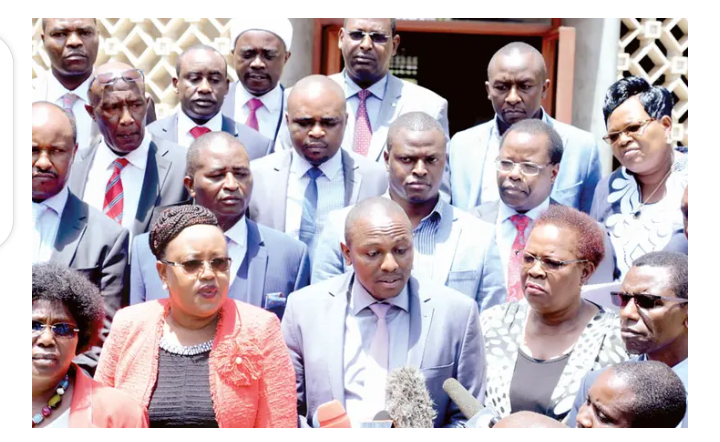 Trouble could be looming inside President William Ruto’s UDA camp

after one of Mt Kenya’s governors threatened to lead a massive walkout from UDA.

This was after Nyeri County Governor Mutahi Kahiga threatened that he will lead Mt Kenya out of the wheelbarrow party if their presence is not needed or respected.

This was after Kahiga complained that there were plans by a section of UDA leadership on Thursday,

to lock out one of their own sons, Mwangi Maina from election to the East African Legislative Assembly post. In an indirect attack on Ruto and his team, Mutahi claimed that the mountain watched with concern what happened in the nominations and that if they cannot

be respected in the party, they can consider walking out since they are not bounded by anything and that the marriage is still young.

“On Thursday, we watched closely at the happenings in Parliament during the East Africa Legislative Assembly (EALA) nominees elections, and we took notes of what transpired.

We want to say that we are going to walk together in this journey, and still, if we are not needed, we are not married to

anyone who thinks that he can take us in rounds….the marriage is still fresh and we can walk out,” stated Kahiga.

trying to lock out their sons including Mwangi and former Kieni MP Kanini Kega from the EALA posts.

They, however, lauded DP Rigathi Gachagua, whom they said aided the two and ensured they are elected despite the pressure.

On his part, Rigathi said he will continue supporting young MPs from the region and that he will soon facilitate Kanini Kega and Sabina Chege’s move to UDA.

Most of the MPs from Mt Kenya defied the odds and voted in Mwangi, who had been replaced by Fred Muteti . Cracks On Ruto's UDA Can't As Governor From Central Threatens To Walk Away..
0 1,000
Share FacebookTwitterWhatsAppTelegram

“A church paid me for each successful murder.” Serial Killers admits to…

Kenyan Government To Offer Between Sh50,000-Sh3 Million For Business To Individual…

It Is Possible To Avoid The Ksh. 5000 Monthly HELB Penalty. This Is How..

“Your Language Is Foul.” Kenyans Are Unhappy With DP Elect Over His…