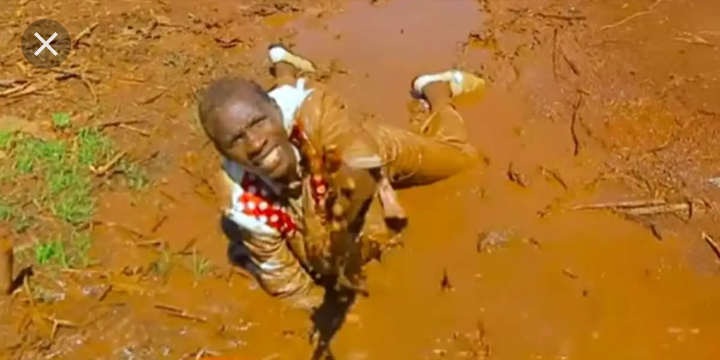 The music industry in Kenya is extremely competitive and requires more than just talent to remain afloat. Embarambamba is one artist who is best known for his publicity stunts than his musical talent.

The gospel artist will roll on mud, jump from trees and ride on clueless cows in a bid to pass the good word. The singer started as a secular artist before going on to become a gospel artist.

The singer was born on 1st February 1988 in Keroka, Nyamira county.

The super hyper singer is a married man and a father of five children.

After completing his Kenya Certificate of Primary Education, he found his calling in music.

He started associating with famous artists so that he could understand why and how people got to know them. He also started working under Mr. Ong’eng’o.  The well known artists had requested him to perform alongside him in an event that was likely to be attended by the late Nyachae. The name Embarambamba came while he was playing drums.

In 2009, he went to work with Man Pepe Sagero until 2016 when he released Amatindogoro.

Embarambamba quit the secular world for gospel music where he became a force to reckon with.

According to the artist, the switch from secular to gospel happened when he had a dream where God told him to go and sing, because he was alive and God was alive also. The first gospel song he released was Jesus is alive

He has performed the songs with crazy-if not dangerous- dance moves. What left a lot of people perturbed was him shooting a video on muddy water. The video begins with him donned in a colorful suit pulling strange moves in a banana plantation then quickly jumps over a fence into a maize plantation before jumping and rolling aimlessly in dirty water and mud. According to the artist, when performs the holy spirit lands in him and gives him the extra strength and that his moves are not premeditated.

Embarambamba theatrics seemingly have no limits. A video of the musician jumping on a young lady and humping on her several times has caused quite a stir on social media. The artist was performing in an unnamed club along Thika road. Kenyans of all walks of life lambasted the gospel artist for behaving in an ungodly manner.

Embarambaba came out to defend his actions saying Kenyans have judged and insulted him without taking time to listen to the message of the song he was perfoming.

The energetic musician went on to defend his actions saying that even Jesus came into this world to save sinners so that they would be reborn and know the good ways of the Lord.

Replacing A Lost Or Damaged Title Deed In Kenya.

Most Marketable Diploma Courses Compared To Degree Courses In Kenya.