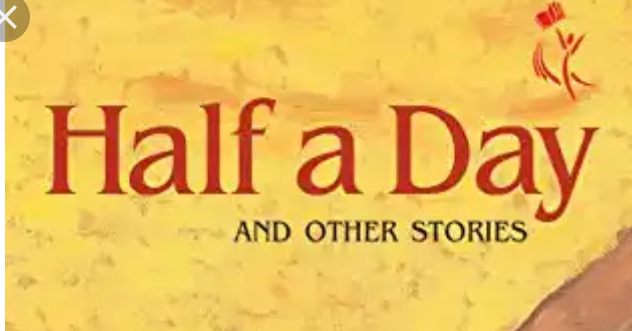 Book Review: Half a day and other stories. An anthology of Short Stories from North Eastern and Eastern Africa

Half a Day And Other Stories is a collection of carefully sampled stories on variety of issues and themes, artistically delivered through most enriching stylistic devices ever known in the literary world. It is a combination of fresh contemporary writings cocktailed with confident classics that have defied the quick passage of time. The river of African culture stealthily flows through these stories to give mother Africa the identify she knows best both in her native and alien wisdoms.

Myriad of educative and entertaining themes germinate, blossom and burst open much from our comprehension of the stories below:-
1: Half a day by Naguib Mahfouz.
2: The town by Eneriko Seruma
3: Moneyman by Peter Nazareth
4: The martyr by Ngugi wa Thiong’o
5: A meeting in the dark by Ngugi wa Thiong’o
6: Letter to my sisters by Fatmata Conteth
7: Solitude by Nawal El Saadawi
8: Against the pleasure principle ; Saida hagi-Dirie Herzi,
9: Government by magic spell by Saida Hagi-Dirie Herzi
10: Who cares for the new millennium? By Hama Tuma
11: Heaven and earth by Wangui wa Goro
13: On the market day by Kyalo Mativo
14: The hands of the Blacks by Luis Bernado Honwana
15: Breaking loose by Moyez G. Vassanji.

Half a day by Naguib Mahfouz, Egypt – 2011
Mahfouz, through the voice of a young narrator takes us through a journey of education. A young boy is introduced to schooling by his father. He views it a punishment at first. He’s left in school and the father goes away. Symbolically, this is an entire life experience. Life, in itself is a school.
“Why school?” I challenged my father openly. He is naive at first…………
“Grandpa, let me take you across.” He is now an old man.

The town by Eneriko Seruma – Uganda, 2008
In this story, modernity meets tradition. The town people shock the villager at how they do their things! The taxi operators, the drivers and their mad rush, the crowd, the medicine-seller. So much humor from the villager’s description of happenings at the town – shocking? “That is some strong medicine…curing all those ailments?”
“You are talking about a mumbwa?…
“Yes, yes. Are you impotent? Is your wife running away? Are you troubled by your in-laws? Or are you after your neighbor’s wife?…”

Moneyman by Peter Nazareth – Uganda
Mr. Manna Leita later named Moneyman! Who can forget him, anyway? Manna is a rich man from the little town of Apana. He made his money through two ways. One, he lends money but charges a whooping 40% just in two weeks, usury. Two, he did not spend any. He thinks everyone wants his money, he can’t marry. When he break a leg while chasing a young miss, he can’t spend money on medication. But he treated by the Diases whom he imagines want his money. He later moves in with the Fernandeses when discharged from cheap grade B hospital. To much love for money makes him so thankless , falls out with the Fernandeses and Mr. D’Mello who tells him off.

The martyr by Ngugi wa Thiong’o – Kenya.
Fate brings together, Mrs Hill, Njoroge, Mrs Smile, Njoroge’s father (killed), Mrs Hardy. Well, it’s a story about the colonial error and struggles for independence. The natives and settlers keep hatreds for each other, and for different reasons. There is murder, Mr & Mrs. Garston. There’s thick tension. Towards the end of the story, Mrs. Hill mistakenly shoots Njoroge. Out of fear, she kills her house who, incidentally sneaks to save her from a planned attack by the ‘ihiis’, freedom boys. To her, all natives are bad. Njoroge becomes the martyr. He betrays the boys. strange twist?

A meeting in the dark by Ngugi wa Thiong’o – Kenya.
John and Wairimu have their tender love brewed and drunk in darkness. Born of an unusually strict christian-convert of a father, Susan, John’s mother felt her son was morally tortured by her husband who expected nothing less than perfect behavior from the young John. There’s is a sharp conflict between John’s father (Sternly) and mother over his upbringing. Only stories of Jesus would do in his house so that John grew up mortally afraid of his father. John is soon joining Makerere University in Uganda. Out in darkness, he dared out to meet Wamuhu, a circumcised non-convert. Cultural conflict at play. Wamuhu is pregnant and they’ve both contemplating procuring an abortion to John is to marry her. Out of raw desperation, he unconsciously kill Wamuhu, in darkness!
Soon, everyone will know that he created and killed.

Letter to my sisters by Fatmata Conteth – Ethiopia.
This is the most painful suicide note I’ve ever read. The writer, Dr. Dao N’damba is born and bred in the strict Islamic society. The harrowing experiences of the womenfolk in her community pushes her into sacrificing herself (herself) just to bolster change. The letter to her sisters is a protestation against discrimination meted on women, they go through extreme inner turmoil in marriage, (it is forced and you remain voiceless). They are treated with contempt and opprobrium. The women folk are culturally discriminated against at education institutions, at work places, at family levels it’s worse. You live your life to please others.
Dr. Dao commits suicide and Fullah town lost its first female doctor.

Solitude by Nawal El Saadawi – Egypt, 2006
In prison, life is not quiet anyway. Boduur & Fawqiyya sleep and wake up alternately to treat the inmates to a cocktail of disruptive experiences. We are in a female cell, here, there’s no privacy. However, the narrator craves solitudeto fix her literary life, writing. She seeks a transfer to her own, quiet cell but, no!It is a collective torture in here to the extreme. Inmates eventually go on strike to protest it. Violence, discrimination against women remain key themes. Even at the prison, this still plays out. Women in this prison are thus in a prison within a prison.

Against the pleasure principle ; Saida hagi-Dirie Herzi.
The traumatic experience that befell Rahma at 4 years is still fresh in her memory 19 years down the lane. Female circumcision, Female Genital Mutilation (FGM) was inevitable. Everyone accepted it in the Muslim world. But who could imagine its aftermath on the girl child? From Somali land to the USA, stubborn stain of her people’s culture defies the distance. Dahabo and Hawa both underwent the cut share extremely bitter experiences of it. Rahma is to accompany her husband to the US. Experiences and stories of FGM shook her to very core.The womenfolk face untold pain, embarrassments, loss of sexual urge, complications during childbirth amongst others. At the hospital in the US, Dahabo’s doctor upon the sight of her distorted organ breaks into tears. Someone, must save Rahma’s unborn child from this!

Government by magic spell by Saida Hagi-Dirie Herzi
10 years old Halima at the age of 10 is possessed by a benevolent and helpful jinn she once stepped on, she’s been ailing for long. Healer, or Waadad reveal the origins of her illness is supernatural. Her jinni has powers to foretell the future and heal the sick. Halima resists all marriage proposals. Her powers get her summoned to the country’s capital, Mogadishu, where many of her clan members have gained the most powerful positions in government for the past 10 years.
Halima’s powers are tapped into for political gains. The capital’s water system are spelled by her jinni to silence the people not to ask questions. Her jinni’s parents even come to visit her to advise her on proper care of their child. Halima manipulates people’s fear of her jinn in order to gain and stay in power. Themes such us misuse of power, injustice, superstition, greed & corruption take centre stage.The government is under spell.

Vicar named, Sam is administering in church to a congregation mostly of poor women. Mme Lady is a central member in this church. She likes courting attention as she’s married to a rich and influential man called Kimanja.

Contrary to what majority think, Mme Lady is inwardly a broken woman who hides behind riches. Like most women in her community, she’s fully dependant upon her husband.

Kimanja is a violent and abusive husband. He assaults her often. But because she is nothing of her own, she has nowhere else to go. If anything, he paid very high dowry for her and her parents can’t afford to return should she opt out. Again, without him, she has no glory and respect. Mme lady disrespects the Vicar for:-

i) Vicar is unmarried, so, he has little knowledge of their needs and challenges in marriage i.e domestic, health and financial issues.

iii) Vicar exploits congregation by preaching through his preaching on giving more.

Mme Lady thus competes for attention with the Vicar, she comes late and disrupts sessions. Eventually, her suffering through domestic violence surfaces publicly.

On the market day by Kyalo Mativo
Setting is in an unknown country bedeviled by disaster, inhabitants have ‘come to the end of the tether,’ according to the main character Kamali Lango, it hasn’t rained for the past two years and the land is dry. There’s shortage of water and food and grinding poverty is real.
Kamali Lango embark on a long journey to the market to sell his only bull, but before he leaves, he munches yesterday’s rewarmed leftovers of boiled maize and ‘some kind of tea and sour milk- in silent dusk, he must not wake up his nine hungry children for there’s nothing left for them.
Through Radio Wananchi, citizens are reminded that drought and famine were natural phenomena and that the government cannot take criticisms but the peasants wonder why the government hasn’t come up with a water project for the people? Kamali recalls politicians earlier with bags of promises on change which never materialised. He wonders where Pancreas Mbula is. Poor governance is responsible for continued misery.

The hands of the Blacks by Luis Bernado Honwana
A little boy, the narrator, grows so inquisitive. He begins to ask different people for an explanation on why black people have hands which look lighter than the rest of their bodies.
In his mission to have the right answer, he talks to his teacher who claims that blacks hands are lighter since they once crawled on the ground like to animals. 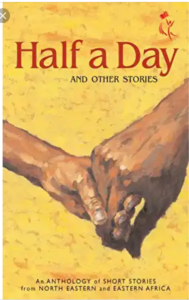 Nairobi City To Enjoy A Lasting Taste Of Electric Vehicles In The Wake Of Technology.

EACC: Ward Admin To Pay Back Over Ksh. 3M Salary Earned For Getting Job On Fake…

More Details Emerge As IEBC Announces Finishing Verification Of Forms 34A & 34B.

Join KMTC: Applications For 2022 September and  March 2023 Intakes On.