Churchill hosted the Big Laugh Festival at Thika Road-based Quivers Lounge to mark the return of his live recordings as well as celebrate his 44th birthday.

The star-studded event saw the return of hallmark artists like Eric Omondi.

However, the highlight of the night was the appearance of Terrence riding on the trendy Papa Freddie of Ngamwaya chronicles.

Terrence whose real name is Lawrence Mwaura, made a grand entry into the event before he was joined on stage by her wife Milly. 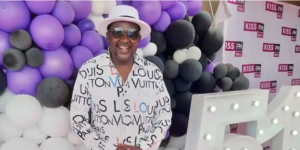 Speaking on his relationship with Churchill, the content creator disclosed that he had been behind the creative scripts in the popular Churchill Show before Covid- 19 hit the country and public gatherings were stopped.

He further revealed that the Papa Freddie character was created on Churchill Show and thanked the host for giving him the platform before handing over the Ksh 200,000 gift to the emotional comedian.

Reasons For The Increasing Cases Of Indiscipline In Kenyan Schools.

Reason Why Tomatoes Split On Farms And Prevention