A Young Girl Moves Ruto To Tears Through A Poem During UDA Rally.

DP William Ruto was left in tears after a young woman in Kuresoi South, Nakuru County read a moving poem to encourage him. 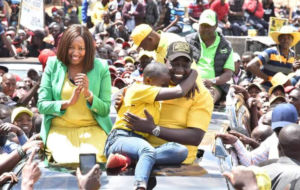 The poet Doreen Cheptoo from Olenguruone, Kuresoi south, praised DP Ruto for what she termed as his selflessness in supporting other leaders such as President Uhuru Kenyatta and ODM leader Raila Odinga to actualize their political aspirations. 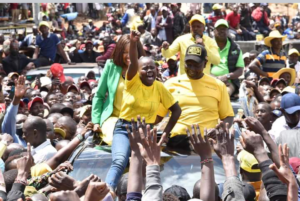 Cheptoo narrated the poem, which encouraged Dr Ruto to lean on God as he seeks to succeed President Kenyatta. The poet also advised the DP to be dedicated and continue supporting churches.

DP Ruto broke down in tears after Cheptoo stated that: “God’s glory had risen upon him”. Cheptoo also shed tears while emotionally narrating the spiritual poem.”No matter how much it hurts don’t let your enemies win. 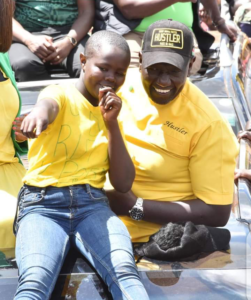 May God give you strength and capacity to overcome your enemy,” Cheptoo stated.”God is about to honour your name publicly. And may I tell you this, it’s better to have an enemy who honestly says they hate you than a friend who puts you down secretly,” she added.

The young lady noted that the DP was a chosen man and he should not refrain from supporting churches with donations, due to political backlash from his competitors.The comments about funding churches come barely five days after DP Ruto explained why he stopped making contributions towards the construction of churches.

During a church service in Vihiga County while in the company of Amani National Congress (ANC) party leader Musalia Mudavadi and his Ford Kenya counterpart Moses Wetangula, the DP disclosed that he would not make contributions to the church for the next seven months.

Ruto, who has been famed for his dishing out millions to churches, stated that he was complying with the requirements issued by the Independent Electoral and Boundaries Commission (IEBC) that bars aspirants from engaging in Harambees.
story Courtesy

Kenya Defence Forces KDF To Run Their Own Media: Radio And TV Stations

MoE Cautions On Early Closing Of Schools, Before 4Th March.